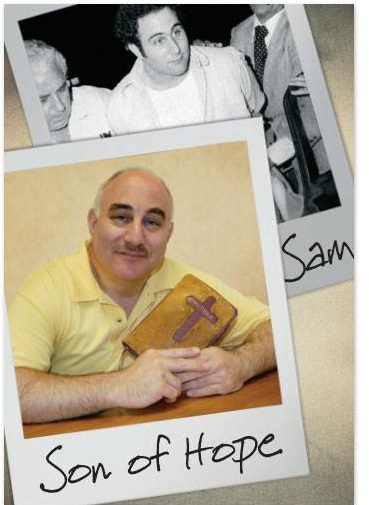 Sentenced to six life terms as ”Son of Sam,” but now serving them as ”Son of Hope,” David Berkowitz has kept a spiritual journal since 1998.  He writes with great regularity, often a few times each week.  These entries cover a wide variety of subjects and themes, often beginning with a Scripture passage.  They are concise, clearly written pieces that reveal an intelligent creative mind compelled to share that which is within him.  Since 2005 his journal can be found on his online site, AriseAndShine.org.

Some are reflections on Scripture, and retelling of biblical stories, such as the story of Ruth.

There are entries about life in prison, which, in complete sincerity, he calls his ”home.”  One is about the death of a friend in a neighboring cell, for example, and another on how his fellow prison inmates produced one million bottles of hand sanitizer during the outbreak of COVID19.

He has written much about his love for his adoptive parents – his mother, Pearl, who died when he was fourteen, and his father, Nathan, who died years ago at the age of one hundred and one.

I can’t even begin to scratch the surface of his prolific writing as I survey his over 100 entries from 2019.  They include his dealing with a Muslim in prison with him, which ends in a request to the reader for prayer for this man, by last name.  Another is on the fleeting nature of life and need for reconciliation with God, as he reflects on a 9/11 Memorial Service which he viewed on television, and another on the suicide of a young girl fixated on the Columbine school murders.

David recently emailed me with a request. “Please remind your friends to remember our brethren who are living out their faith in nations where there is little to no freedom to worship our Savior and openly gather together as one body in Christ without having to experience some form of persecution.”  After asking my prayer for a small group of persecuted Tunisian Jews, and always eager to share his thoughts, he then pointed me to a journal entry written a few years back on faith in Tunisia.

His mind roams freely and energetically into every topic imaginable – and this from a man who has been incarcerated for forty-three of his sixty-seven years.  But everything he writes is centered in faith.  Faith in the One who called him thirty-three years ago.

As I read the journal pieces, it struck me that if an unbeliever were to read some of his entries, that reader could not help but come away thinking that there has been a great change in David Berkowitz – indeed amazed at the transformation in this man.  Even if suspicious as to his motives, any reasonable person would have to conclude that, in the least, some good has come from “Son of Sam” – that there has been “rehabilitation.”

But we, of faith, know better.

Rehabilitation, the stated goal of the prison system, may change thinking and behavior.  But it cannot change the heart and soul of anyone.  No self-help book, no twelve-step program, no medication or pill, designed to produce a tranquil state of mind, nor any system devised by man could accomplish this transformation.

When calling David Berkowitz, it was the Holy Spirit who made the change from “Son of Sam” to “Son of Hope.”

May many more be blessed by David’s ongoing ministry.