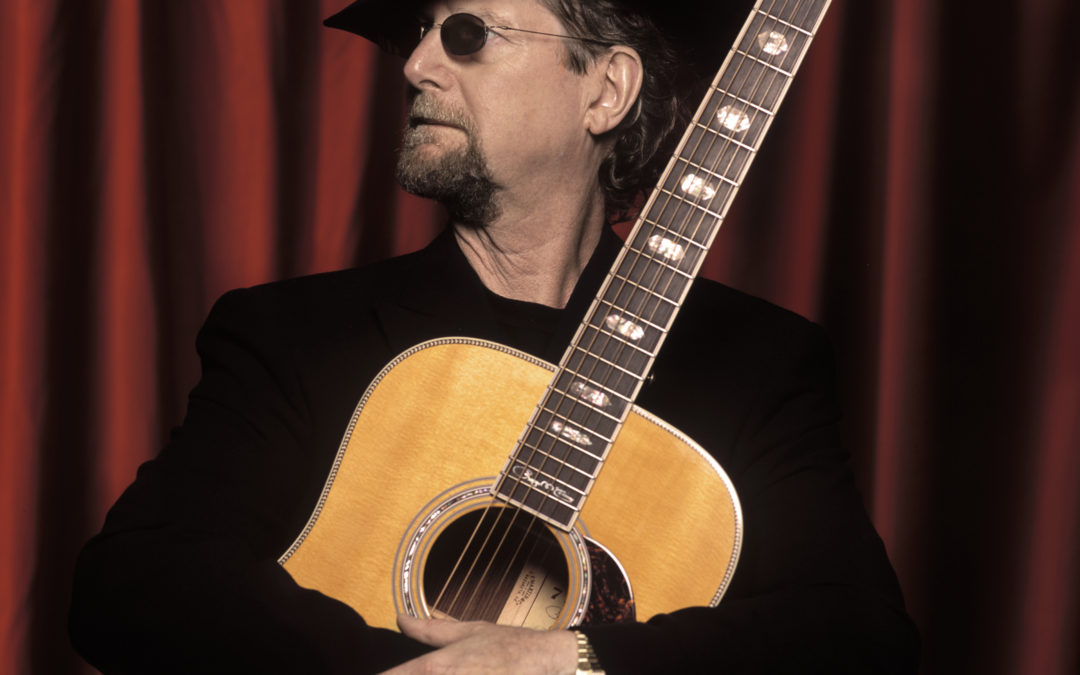 In the post-World War II years, mass culture exploded as radio sent out new music created by artists tuned to teen-aged ears. What was popular in the late 1950s and early 1960s then became massively popular as the growing music industry kept inspiring young listeners with new sounds coming from Elvis Presley, Buddy Holly, Chuck Berry and others.

Soon the British Invasion brought the Beatles, Rolling Stones, Animals and many, many others.  The Brits took much of what America sent them – Blues, Rock ‘n Roll and Jazz – and gave it their own spin.  After the Brits landed in 1964, homegrown American music faded off the radar of many young U.S. listeners.

The Byrds were widely acclaimed as “America’s answer to the Beatles,” recognized by their harmonic sound and innovative contribution to pop-rock music.

Roger McGuinn, whose distinctive electric 12-string guitar and vocals fronted the Byrds, is a seminal figure in the music of that vital period. The Byrds became luminaries, as the overlapping genres within top-40 pop music developed and morphed and new styles were created. The Byrds brought many influences together, exploring and expanding from Folk Rock to Psychedelic to Country Rock.

But Roger McGuinn is of interest to us chiefly because of his faith.  He and his wife, Camilla, have been Christians since the late 1970s, and, when we reached out to them, they were eager to share their faith with us.

Recently Roger was on tour with another founding member of the Byrds, Chris Hillman, along with Marty Stuart and the Fabulous Superlatives in a 50th anniversary tour celebrating the release of the Byrd’s Sweetheart of the Rodeo album.

On stage they performed some of the Byrds’ greatest hits, along with every song on the Sweetheart’s album. As he introduces the song “I Like the Christian Life” in the show, Roger said, “When I sang this song in 1968, I didn’t know what it meant…Now I do!”

Pam Danziger interviewed Roger and Camilla via phone in November, 2018, while they were in Dallas.

Perhaps nothing could be more antithetical to the Christian than the “rock ‘n roll” lifestyle of the 1960s and beyond. Roger McGuinn lived through it and came out the other side healthy, happy with a loving devoted wife, Camilla, and most profoundly with a deep and abiding faith in God the Father, Jesus His only begotten son and the Holy Spirit.

Inducted into the Rock and Roll Hall of Fame with the Byrds in 1991 which coincided with the release of a solo album entitled Back from Rio, Roger is arguably the most prominent rock legend who also claims fraternity in the family of faith.

While famed in rock circles, Roger downplays his celebrity. “I am just a working musician. I check my bags at the gate like everybody else,” he humbly says to me.

Roger’s work today includes touring with original Byrd’s band mate Chris Hillman along with Marty Stuart in a 50th anniversary “Sweetheart of the Rodeo” tour, where they perform songs from the original Byrds’ album recorded in 1968, like this one “Hickory Wind.”

It is largely secular music recorded before Roger accepted Jesus as his guide and master, but there is plenty of faith to be found in the show, with “I am a Pilgrim,” my personal favorite.

Also notable about the Sweetheart’s tour, all three performers on the Rodeo stage are professing believers. And that is critically important to Roger and his business-partner and wife of 40 years, Camilla.

Roger also does an intimate “Evening with Roger McGuinn” solo show, which will pick back up again upon completion of the Rodeo tour. He described that show as a play which is scripted modularly, so he and Camilla can slot in specific songs and stories that they feel called to include for each performance. He doesn’t use the stage to preach or pontificate. “What I do in that one-man play is take people’s minds off their troubles for a couple of hours,” he shares.

But each evening includes one song or a couple with a Christian message, like “Light Up the Darkness” from his Sweet Memories album or Lead Belly’s “Rock Island Line.” “I put a word in about Jesus in the show intentionally, but I don’t preach,” he continues.

Explaining his decision to remain a primarily secular artist, rather than crossing over into the Christian artist camp, Roger says it was a question that he and Camilla prayed hard about early on.

“When I came to the Lord in 1978, we scoured the Bible to find out what to do. I got from the teachings of Paul that I should stay where I was when I was called. That is good advice.” Roger adds that he was invited by Barry McGuire, a 1960s rock compatriot and now a Christian artist, to sing in a Christian concert.

“It was preaching to the choir; everybody there was a Christian,” he says. “It didn’t make much difference. It wasn’t what I was called to do. I was called to be a secular artist and be a witness on the side.”

Rather than take a public stage to proclaim faith, Roger and Camilla are called to testify intimately and personally to the many people they met through their extensive travels, like witnessing to a Jewish chef at the Dallas Ritz Carlton on their current tour or a group of Russian doctors they met on a cruise. “They said ‘Wow! We never heard anybody talk about Jesus that way before.’ We have a personal ministry,” Roger explains.

Born in 1942 and raised a Roman Catholic, Roger says he “threw out the baby with the bath water, like so many of us did in the 1960s,” of his early religious upbringing.  But he continued his spiritual searching, trying Eastern religion, “for a minute,” he quipped, “but it didn’t stick. It was counterfeit.”

That early faith training had an unspoken but strong influence in his musical choices upon co-founding the Byrds. “I’ve always had a certain sense of not wanting to do things in bad taste,” he replied when asked about any songs he might have performed that embarrass him today. “No, I don’t have any baggage.”

And as we know, God is leading and directing those He calls, even if he or she doesn’t realize it yet. I point to an early Byrd’s recording of Pete Seger’s “Turn, Turn, Turn” with lyrics straight out of Ecclesiastes 3: 1-8. That hit song made the Bible relevant to the generation coming of age in the 1960s.

“I know a lot of people use it in churches today,” Roger shares. “Of course, Pete Seger was a communist and I don’t believe he embraced faith.* But it opened the Bible to people who probably wouldn’t have known about Ecclesiastes.”

God used Elvis’ death to call Roger to repentance. “He was only seven years older and died at 42. I was 35 at the time and using all the same drugs,” Roger says. “I had a pill doctor in L.A. that would give me anything I wanted. I decided I had better change my lifestyle. As I gradually got rid of the bad things, the Lord had better access to my spirit.”

God then applied more pressure to effect Roger’s turn. “I felt a spiritual oppression; I felt heavy, like my arms were made out of lead.” God brought healing through the power of prayer with another musician named Billy, “I never knew his last name,” Roger shares. “I told him my symptoms and he asked, ‘Do you believe in the power of prayer?’ I said ‘Yes,’ so he held my hands and said a simple prayer. ‘Oh Lord Jesus, come into this man’s heart in your own time, in Jesus’ name.’ That was it.”

Roger says nothing much happened right away, but several weeks later when he felt the oppression weighing him down once again, he prayed anew and felt the Holy Spirit speaking to him to accept Jesus. “And bam! It went away,” he exclaims.

Camilla followed Roger shortly thereafter, coming to faith in the Los Angeles Art Museum inspired by the spirit of love she felt in the Christian art exhibit they saw there. “For 10 years, she didn’t want to hear the name of Jesus. But then the Holy Spirit spoke to her in the love she saw in a picture of Christ on the cross. We walked out of the museum at sunset just floating,” Roger explains.

In the early days after their conversion, they smoked pot once and immediately found that it inhibited the comfort of the Holy Spirit. “Camilla and I both felt the Holy Spirit disappear and we never smoked it again.”

I went on to ask what that felt like and he explained, “The Holy Spirit is the comforter, He gives you love, joy, peace, patience, kindness, faithfulness, gentleness and self-control.  He makes you feel good and when He goes away you don’t feel good. It was a frightening feeling,” Roger says and adds that the current cultural climate that is moving toward eventual legalization of marijuana is wrong, because “It makes people lazy, complacent and fat.  It is not a good thing.”

Prayers for the Whole World

Together Roger and Camilla share an active prayer and devotional life, that includes daily Old Testament, New Testament and Proverbs study. “It takes a lot of time, an hour or two every morning, but we make time for it,” he says. In their prayers they pray earnestly for their friends that aren’t saved, as well as for those that are. But most especially, “We pray around the world every day,” he shares, praying for the nations and their leaders.

On the day we met, Camilla shared their daily devotion from Ezekiel 22:30, “I went to my knees. Oh Lord, bind your people together as a sweet bouquet unto you.”

In concluding our discussion, Roger shares that he sees his musical legacy in the Folk Den Project, something he has worked on since 1995 to preserve and record traditional folk music. “The new folk singers are writing their own songs, but not doing traditional songs. There is a wealth of material that has been plowed under. I compare it to bull dozing a beautiful Victorian home to put up a stainless-steel and glass building,” he says.

Roger’s passion is to preserve the traditional folk-roots melodies and keep them for the next generation, including children’s songs, sea shanties, cowboy tunes and Celtic and English/Irish songs. “We put together a test children’s album and gave it to the kids next door. They played it over and over again.  When I asked the parents what they liked best, it was the repetitive and counting songs,” he says. The traditional folk song, “Children, Go Where I send Thee,” was the album’s greatest hit.

God, May You strengthen and keep Your servants Roger and Camilla and as You give them opportunity, may they do good to all people. Amen.

* Note: Seeger was raised in the Calvinist/Puritan New-England  tradition and was quoted by Beliefnet as saying, “[I used to say] I was an atheist. Now I say, it’s all according to your definition of God. According to my definition of God, I’m not an atheist. Because I think God is everything, because I don’t believe that something can come out of nothing.”