Thieves On Crosses: Reflections on Rocky Sullivan in ‘Angels With Dirty Faces’ 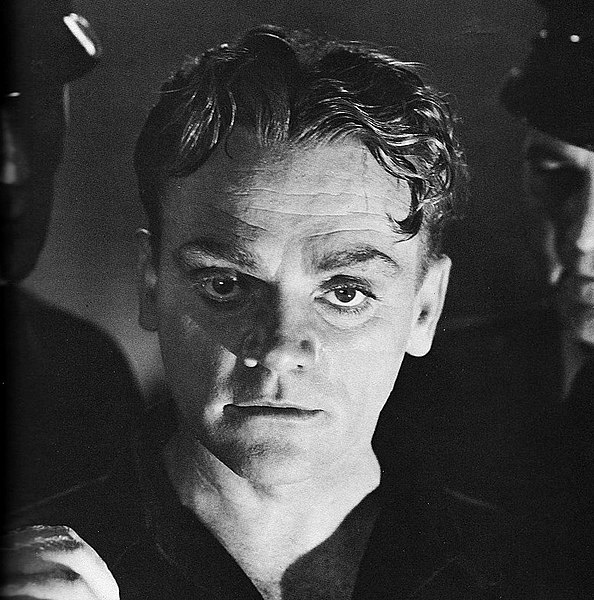 Warner Brothers’ 1938 gangster-film classic, “Angels With Dirty Faces” offers a fictional presentation of the power of the Holy Spirit.  This most moving and powerful film stars James Cagney as Rocky Sullivan and Pat O’Brien as Jerry Connolly.

“Angels” is excellent for any film genre, lauded by critics to this day.  But more importantly, it is noteworthy to the believer for its emotionally striking ending.

Rocky Sullivan has been a criminal throughout his life.  His lack of fear defines him – to himself and to all who cross him.  His fearlessness is all he has in life.

As the film opens, Rocky and Jerry are dirt-poor teens in New York City’s “Hell’s Kitchen,” stealing coal, food, and whatever else they can get their hands on.  During a robbery, Jerry escapes but Rocky is caught by police and sent to the reformatory, thus beginning a cycle of crime and incarceration.

Fifteen years later, Rocky (Cagney) is an infamous gangster, frequently making the newspaper headlines.  Jerry (O’Brien) has become a priest.  He is attempting to disciple a gang of impoverished young toughs – boys much like he and Rocky once were.

After being released from prison, Rocky returns to his old neighborhood and reconnects with Jerry at the parish church. There the gangster meets the boys and sees the gang’s admiration for him and his criminal activity, which they have already begun to emulate.  He is their hero.

As Jerry learns of the gangster’s continued involvement with the mob and sees his influence on the boys, he becomes a moral crusader and highly visible crime fighter and so becomes a target for murder by Rocky’s criminal associates. When Rocky objects to the proposed killing of the priest, they attempt to kill Rocky, but, shooting in self-defense, he kills two mobsters.

The police track him down. Though acting for good in saving Jerry’s life, Rocky is sentenced to death in the electric chair.

In the film’s magnificently scripted and directed climax, Jerry visits the condemned man in his cell minutes before his execution.  The priest tells his old friend that the gang believes their hero will die like a man – not “yellow.”  This pleases the condemned man, who remains cocky and assures Jerry that he will remain fearless in the face of death.

Then Jerry asks for a last favor.  Surprised, with his death just moments away, Rocky replies, “There’s not much left I can do.”  Jerry explains that he wants Rocky to feign cowardice and so become despised by the boys in death – not glorified. The priest’s request upsets him.  “You’re askin’ me to throw away the only thing I have left!  You’re askin’ too much!”

After Jerry tells Rocky that what he is really asking of Rocky is “to straighten himself out with God,” the criminal still refuses the priest’s request.

The warden appears.  The priest and the gangster, surrounded by guards, begin a slow walk – the death house’s “last mile.”  Once more as they proceed, the priest, in a near whisper, asks Rocky to reconsider but is again refused.

Director Michael Curtiz’ remaining shots are primarily close-ups.  The solemn priest and the fully composed criminal shake hands just feet from the torturous device that will send thousands of volts through a human body – literally burning the condemned man to death.

There is no fear on his face in close-up, as he takes his last few steps – only his resolve. Then we see Jerry, who stands nearby, silently praying.

But then, with the camera still on Jerry, we hear moaning…..a pitiful wail….then pleading.  “I don’t wanna die, oh please!  Please, no, I don’t want to burn in Hell….please don’t kill me.”  We only hear him break free of the guards and then we see Rocky’s hands clawing at a radiator. The guards pry him loose as he continues to wail and beg for mercy.

The camera returns to Jerry, eyes heavenward, and we hear the guards struggling to strap him into the chair.  In the midst of his cries, the switch is pulled followed by the hum of electricity.

For my money, this is one of the most emotionally powerful scenes on film.

The intention of the film’s writers is clear.  Rocky Sullivan – a thief on his burning cross – has answered Jerry’s prayer.  He has turned “yellow” as a final act of redemption.  His desire in his final moments of unspoken repentance is to “straighten himself out with God.”

His is a soul transformed by the power of the Spirit.  With a heart turned to God, Rocky’s one last work of faith is to sacrifice all he has – his fearless pride – to save the young boys from lives which would likely end as his.

Many believers often offer prayers for those who are at life’s end – for those who have lived their lives apart from God. Like Jerry, we too, at times, walk with those on their last mile – thieves on crosses.  We too pray for that act of God, through the power of the Spirit and the work of our Redeemer, which leads others to eternal life.

We ask for a last minute Spirit baptism for those who will never see the inside of a church building – the “unchurched,” who can yet know of the promise of grace through faith in a redeeming God. And whether or not we ourselves actually see this salvation, we believe that all who call on the name of the Lord will be saved.