Skip James ‘Had the Blues for the Human Race’ 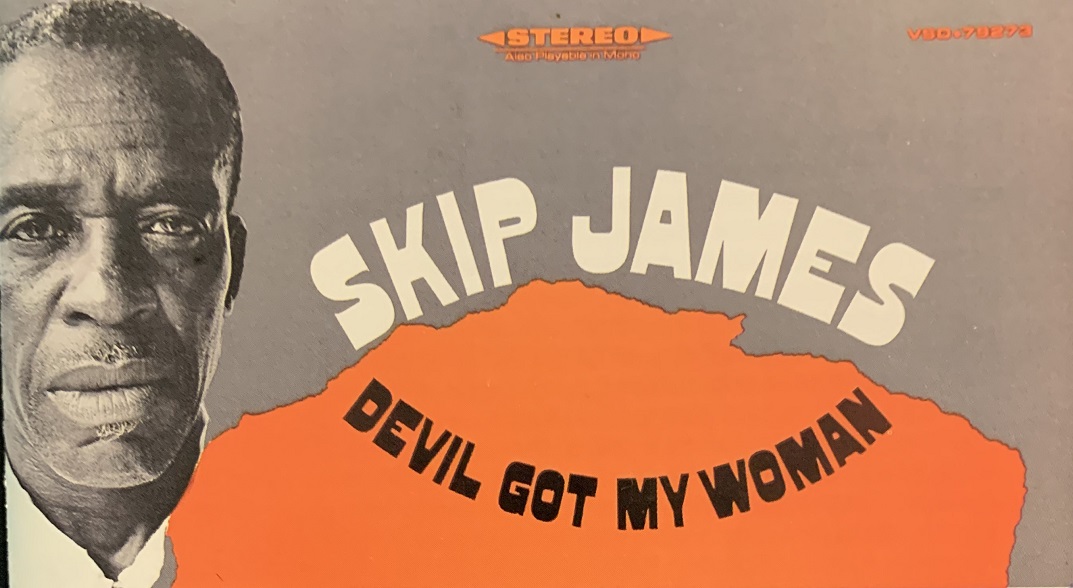 The “Folk Revival” of the late 1950s inspired an interest in the early recorded acoustic blues music of the 1920s and 30s – blues being an expression of folk music from the Deep South. Those who recorded the blues back then were black, so it was made available on what was termed “race records” and was marketed to black listeners.

This music was primarily guitar based and young guitarists, who were beginning to write and record, were attracted to the often intricate and unique finger picked styles of those early blues acoustic guitarists.

Soon this young generation of blues enthusiasts would travel South in search of these voices from the past – to “rediscover” them.  Collectors cherished those old records that they found in dusty attics and “flea markets.”

In most cases, nothing was known of what had become of these early blues artists, only a few of whom had continued recording.  Their current locations were often unknown, and even their photos were few and hard to find.

When they were eventually contacted, these musicians, now in their sixties or seventies, were amazed that anyone would be interested in them and their old music.

Upon their rediscovery, these bluesmen were invited to perform at folk and blues festivals for largely young, white audiences. They even appeared on television and played venues in Europe where American blues was admired. They recorded again, decades after their last records were made.

Their names are legendary in blues circles: Mississippi John Hurt, Son House, Gary Davis, Scrapper Blackwell, Pink Anderson, Willie McTell and Booker T. Washington White – who hated the change of his first name to “Bukka,” as it appeared on his record labels.

And then there was Skip James.

Nehemiah “Skip” James was born June 9, 1902 in Bentonia, MS.  His mother worked as a cook for the owner of a plantation. Given the standards by which blacks lived in Mississippi at the time, his life was relatively privileged.

As a young boy, he was given a pony by his grandmother.  He taught himself piano and guitar.  But his father left the family when he was twelve, and he became as “wild as a buck-rabbit,” he later said.

Raised in a Christian home, James would reflect that his childhood was “more refined” than the life he would come to lead after leaving home at age seventeen.

He went on to work in lumber and levee camps and on road construction crews.  By his own telling, he lived a violent and sordid life, shooting at least two men in self-defense.

During Prohibition, he played piano in “barrelhouses.”  James became a gambler, a bootlegger and, for a short time, a pimp.  “I used to be a mean bastard,” he told his biographer, Stephen Calt.

James returned home to Bentonia in 1924.  In addition to gambling and bootlegging, he played guitar at house parties to earn additional money.  And he began to write his own songs.

Friends urged him to record his music, and he successfully auditioned for Paramount Records.  In February 1931 – his first and only studio session until his rediscovery – he recorded 18 songs in two days.  He agreed to be paid a flat $40, rather than counting on royalties in the Depression-era record market.

Then in 1932, his wandering father returned home, now a believer and an evangelist.  Through his influence, Skip James’ heart turned to God.  He traveled with his father, working for years in various ministries in Alabama and Texas.  For the next 33 years, he played only “sacred music” with church groups.

“You know my mother, she bowed and she’d pray.
And these are the very words that she would say
‘You know Skippy, you’re my lovin’ son.
Please change your ways.’”

The above is a verse from James’ version of the traditional folk piece, “This Sportin’ Life.”

In 1964, two young musicians, John Fahey and Bill Barth, found James in a hospital in Tunica, MS.  He was recovering from treatment for a cancer in his groin.  They persuaded James to travel north to appear at the Newport Folk Festival.

Performing in July 1964, this most enigmatic-sounding of bluesmen was regarded, appropriately, as “one of the seminal figures of the blues.”

His records “were hailed as the most exciting blues to have emerged in thirty years,” writes blues historian Peter Guralnick.  James’ contemporary Mississippi John Hurt considered him a genius.

It is an understatement to call his music unique.  James’ sang in a falsetto voice often accompanied by his haunting, open E-minor guitar tuning.

In his five remaining years, he would re-record his original songs.  In several albums, he would also record new material, both original and traditional spirituals and blues.  And there were concerts and coffee house performances.

But the cancer soon led to surgical castration.  James continued on, often performing in great pain, until his death on October 3, 1969.

The man, like his music, was unusual.  Many found his serious, analytical personality off-putting.  To some he was seen as dignified, to others, aloof.

When performing for these young audiences, he sometimes seemed “preachy,” as he tried to interject moral cautions in the introductions to his songs.  And doubtless, his physical discomfort may have made him appear distant at times.

James’ style and his idiosyncratic personality led to this fitting epitaph in Blues Universe: “James was possibly the strangest, and most complex of all Mississippi blues artists, and he is also one of the greatest.”

Author Francis Davis said that Skip James “had the blues for the human race.” Even where the narrative of his lyrics is deeply personal, James sings as if he knows that it applies to you, the listener, as well.

Skip James’ soul-filled music stands in a category by itself.