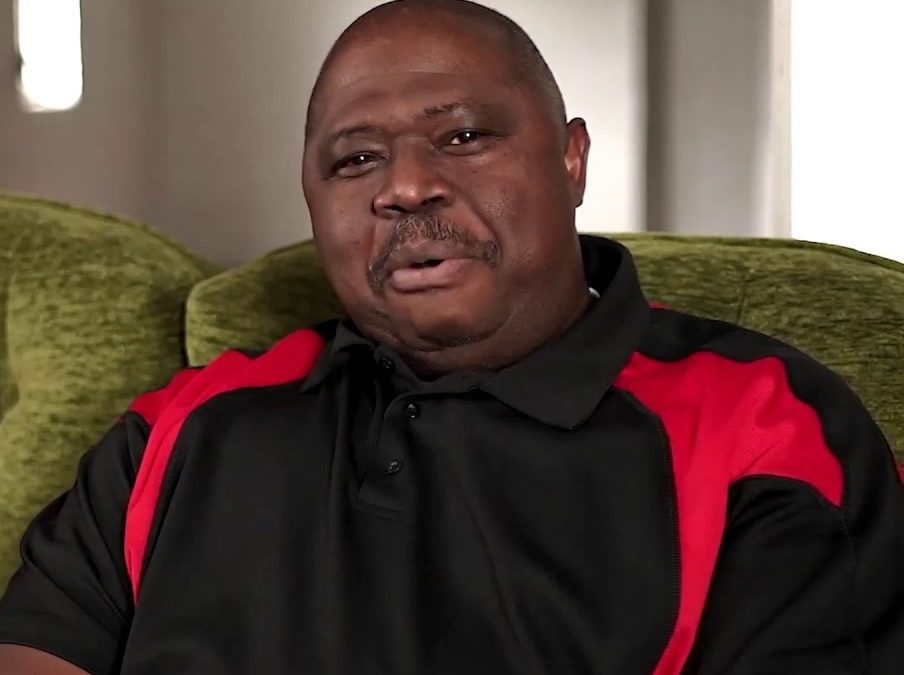 One can easily use a cliché when describing Michael Booth – “A big man with a big heart.”  But it is more than his physical size and the kindness in his eyes that makes this true.  He is big because of the passionate desire he has to serve his Lord with a heart informed by the work of the Holy Spirit.

His fierce loyalty to the truth within Scripture is exemplified by the phrase by phrase call and response he uses each time he addresses Crossroads Mennonite Church in Lancaster, PA.  “This is my Bible…. the Word of God…. I claim every promise in the Bible for my life…. I am who it says I am…. I can do what it says I can do…. I am a person of faith…. I walk by faith…. I live by faith, and I will study to show myself as one approved by God…. Because I am a disciple of Jesus Christ…..”

In the pulpit, that fierce loyalty could intimidate, were it not for his intelligent and gentle manner of teaching, with a humility and sincerity that is not affected.

In conversation with Pam Danziger of Faith Underground, his thoughts flowed clearly and passionately, but almost as one would write, in well-constructed paragraphs.  This interview took place in his office at Water Street Rescue Mission in April, 2018.

Life of Leadership, Learning, Loving and Listening to God’s Call

We’ve all met people whose journey to faith has been a straight shot, raised in the church, rooted in faith from an early age and at least to outside observers never seem to stray from that foundation. Those people seem so blessed to have such an easy path. Such is not the case with Michael.

Born in 1957, he is a black man born in Mississippi whose intact family moved to Chicago then to Philadelphia where he and his 4 siblings were sent to parochial school. “I grew up in a good home. We were Baptists,” he said, “But my mother wanted the best for us, so she sent us to Catholic school. She sacrificed greatly for us.” After his father died, his mother moved the fatherless family to be close to her sisters in West Philadelphia, a largely African-American community.

But then things fell apart. First his father passed away, then in 1987 his mother died in a car accident. “Shortly after that my life was in crisis,” he shared. “I came to the end of myself.” His life’s journey followed a zig-zag path of ups and downs – serving in the military, promotion for stock clerk to manager in a grocery store, addiction and multiple rehab treatments that didn’t take.

As for so many of us, God called Michael in his time of deep personal need, but that path too wasn’t linear. “My spiritual journey took me to Islam. I dabbled with Jehovah Witness, even some Scientology. In my spiritual journey I wanted anything but Jesus to be the answer.”

“I had a lot of losses in my life. I’ve seen a friend killed in school. My father and mother died. I lost my oldest brother who I love so much to suicide. I had been raised in the Baptist church but I didn’t want the God I had been raised on. That is why I said anybody but Jesus,” he explains. “But on a true spiritual journey, you have to open yourself up to where the truth leads you. And that truth landed with Jesus Christ so I submitted my life to Jesus to serve him and to walk this Christian journey of obedience.”

Once on the right path, Michael’s journey led him to the Assemblies of God Teen Challenge, Youth Challenge International Bible Institute and Lancaster Bible College in Lancaster, PA. Through it all, God guided him and paved the way forward. “Trusting in God every step of the way, I got through school with no debt at all, because God called me and said He’d take care of me. And that is what happened.”

Called to work amongst the poor

After graduating from Lancaster Bible College, Michael became involved with the Mennonite church. Lancaster, PA is the original home of the Anabaptist Mennonite and Amish German immigrants that settled in the early 18th century in “Penn’s Woods,” an original colony founded on principles of religious freedom.

Distinctive among the Mennonites is a commitment to pacifism; it is one of the historic “peace churches.” It also is a church with a long standing commitment to missions and service following Jesus’ example.

“Therefore, be imitators of God, as dearly loved children. And walk in love, as the Messiah also loved us and gave Himself for us, a sacrificial and fragrant offering to God.” Ephesians 5:1-2

Landing in small-city Lancaster, PA Michael found the same big-city problems that he knew from Philadelphia or Chicago. “The problems are the same all over the world,” he says. “They just look magnified in the big city.”

He found his calling at Water Street Mission which serves the homeless and hopeless. “I live amongst the poor. That is my calling. He has me serving in this community. It is more service than work,” he says describing his role as Campus Pastor serving, counseling and teaching its guests, its staff and representing the mission in the community. Chapel is a critical part of the Water Street ministry and Michael oversees daily evening services provided by chapel partners, as well as two chapels on Tuesday and Friday mornings. He also serves at the inner-city Cross Roads Mennonite Church.

Like his life, Michael’s path in ministry has taken him on a circuitous journey as well. He served as prison chaplain for five years at Lancaster County Prison, counseling inmates and teaching Bible classes. He also ministered at a several charismatic churches in Baltimore and Lancaster to those he fondly calls “charismaniacs.”

In what he calls “conservative charismatic churches” he found many Bible-believing, flag-waving Republicans. “My Mennonite friends said they were warmongers and asked what I was doing with them,” he laughs. “I don’t agree with everything they are doing. I am not a die-hard Republican or pro-war. But God sent me to be with them, to walk with them and to get to know them. The Kingdom of God is bigger than a church or a denomination. They are my brothers in Christ. We are able to work and love one another and respect our differences. That is my experience, my journey and my service. I am here for God.”

This made Michael uniquely qualified for the diverse ministry that Water Street Mission requires. “I see the people of God in a diverse space. Because I am in this position, I work with people from diverse backgrounds, Mennonites, Presbyterians, Methodist, Catholics, Lutherans, Pentecostals, Baptists, even Muslims and atheists, the whole nine yards,” he continues. “Having that diverse background is a blessing to be about to navigate those different groups and see Christ working in all of them.”

Yet through it all, Michael adheres to the Mennonite doctrine and remains rooted at the Crossroads Mennonite Church where he, his wife and son worship and he often is asked to preach. “I love the Mennonite church, its beliefs and peace stance, which is what I believe the scripture calls the body of Christ to walk in. We are to be reconcilers.”

“Mine is a walk of faith and obedience. I am a disciple,” he declares. On the increasingly divisive culture in which we live, Michael sees many fellow believers are under a great deal of political pressure that sadly result in division not fellowship.
“I don’t believe that God has put us here to take sides,” he affirms. “The challenge for us all is to get back to Christ. I walk with my Muslim friends, my trans friends, and the Jehovah Witnesses and the flag-loving Republicans who are in my life and I love and care about.”

The Gospel breaks down walls, rather than build them up or reinforce them, Michael asserts. “In my work I am trying to help people overcome the social-injustice issues. If we believe the Gospel is the good news to the poor and the dispossessed, we are called to take up our cross and follow Him.”

“A whole lot of crazy stuff is dividing us,” he continues. “But we are not citizens here. We are ambassadors and we can’t get embroiled in the controversies of this world. We can’t let people hinder us from the mission to help them discover who they are in Christ and his purpose for their lives. Our call is to love the least, the last and the lost, plain and simple. I never forget that.”

Michael is a warm and humble man, but fierce in his faith and dedicated to living a life following Jesus.

May we all serve Him and share the good news of Jesus as dynamically as Michael Booth does with the special gifts that He has bestowed on each of us. Amen.